Dark Gates have finally reached gold! This is a road that have started almost five years ago. Developing a game alongside of full time job, being a dad/husband and everything in between was a challenge in it's own right but a great one. I would like to thank to all supporters who helped a lot in many aspects of development. So without further a do let's see what have been included in 1.0 release.

Finally a background story has been added.

This is a big one. From gold release now all heroes stats are persistent. Let's say you have managed to destroy Dark Gates. Now you can save the game after that and start a new adventure with all the stats carried over from the last game. That also means that who has been killed, stays killed.

Additionally if your whole current party have been killed, this no longer means Game Over. If you choose you can continue current adventure with brand new team, assuming you got some heroes still alive :)

Each hero while using a weapon can now score a Critical or Max hit. Critical is a 2x damage hit where Max is a maximum amount of damage by given weapon. Each hit will be indicated by a star and a sound queue while hitting an enemy. 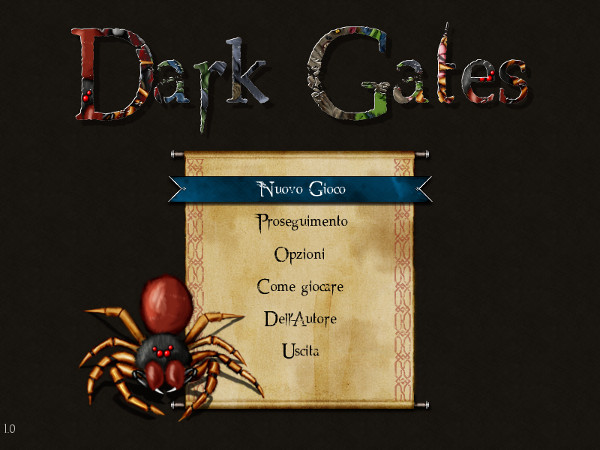 You love to mod games or are want to see how good you are with your graphic skills? Well Dark Gates can help you here. Game now supports complete theme overhaul. All you need is to copy default theme and start moding. Remember that all filenames needs to stay the same. Game will detect your theme and you will be able to chose it from the options menu.

Bug fixes and other stuff

A big number of bugs have been fixed. Please see change log below to see what has been fixed. Also a new weapon has been added - Mace. Quite deadly if you know how to use it (hint: mastery). Post info fight window is also now added after each fight. Now you can see exactly how much XP each heroes gained and what is your loot.

Best way to see what Dark Gates is about is to go to new official games website at http:/darkgates.dfourgames.com